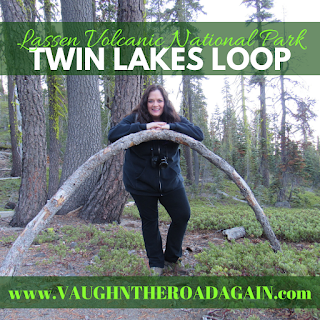 This was our most ambitious hike yet! 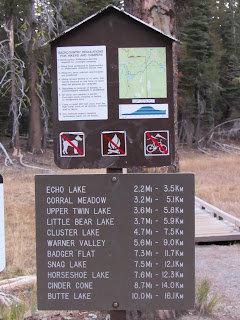 (We'll get to the reasons why later.) 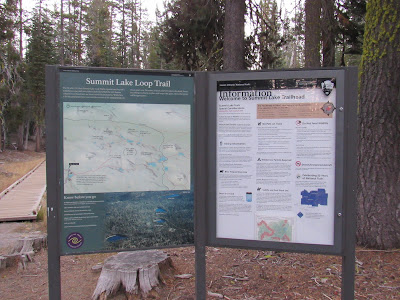 Whatever you want to call it, this hike was a beast and it kicked my patootie, big time. As in, halfway through I started to panic because I didn't know how in the world I was going to find the strength to finish it. (More about my kick-butt perseverance later.) Let's get started!

First, we begin our hike at Summit Lake. This is a beautiful lake--it even has a campground--and I'd like to go back and spend some time here. Preferably sitting at a picnic table with my feet up and a cool drink in my hand. 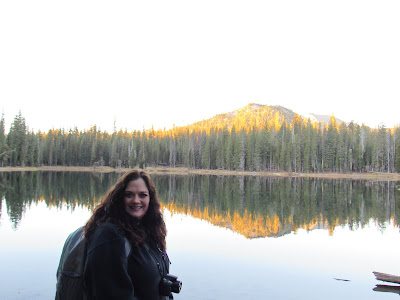 But we're not here to dilly-dally! Time to buck up and get going! 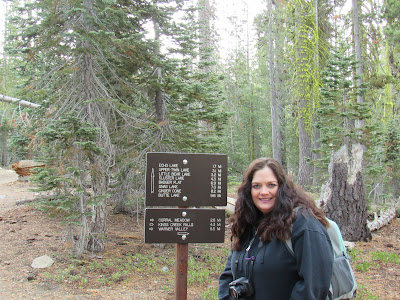 The beginning of this trail is pretty steep as it climbs up the ridge through a fir forest to a manzanita carpeted woodland... 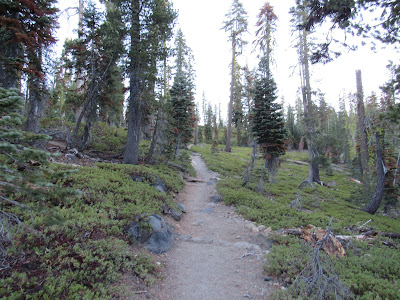 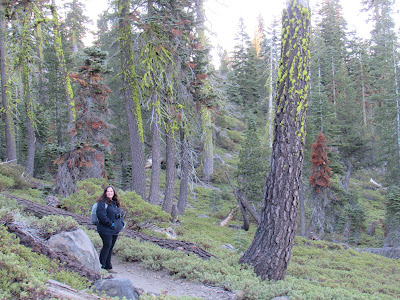 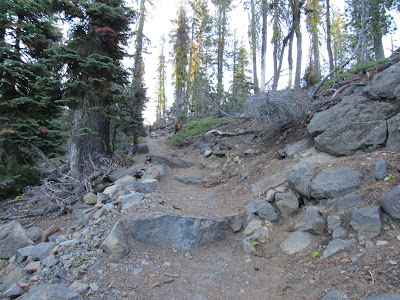 We've done enough hikes lately to know that the best views are a result of all that difficult climbing work... 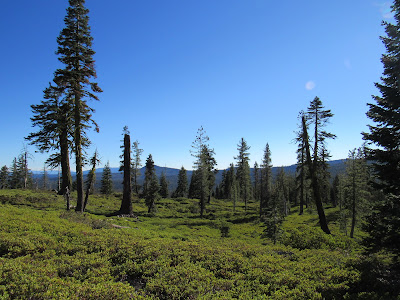 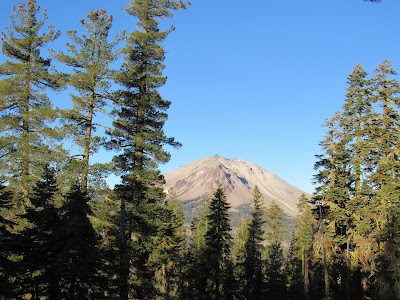 The views are a nice payoff and we enjoyed the unique landscape of the meadow of manzanita... 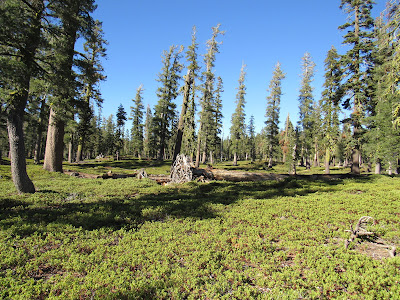 There are several unnamed lakes along the way. I think that if they can manage to stay full through the heat of summer, then they deserve a name! 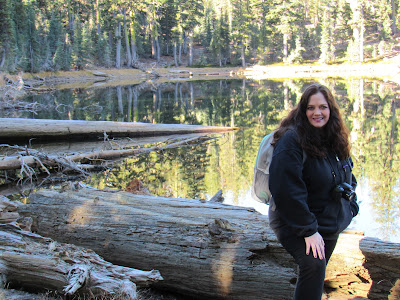 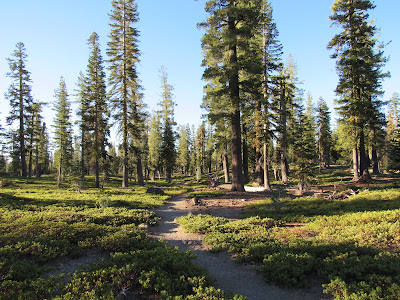 The trail then continues climbing to a ridge top to the intersection of the beginning and end of the Cluster Lakes Loop trail. You can follow the trail to the right to continue to Echo Lake, but we decided to stick it out and hike the entire loop. (Looking back, I wish future self could tell my past self to just hike the pleasant walk to Echo Lake, have a nice time and go home instead of continuing on the grueling loop. That's what you get for trying to push yourself and #hikefurther!) 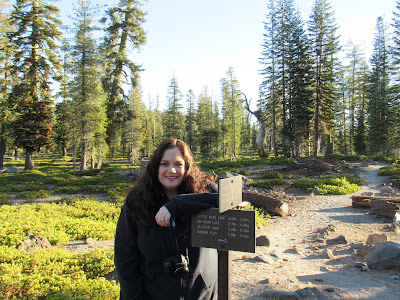 The trail passes through the 2012 Reading Fire area. There were miles of dead standing trees and the park's website cautions that they can fall without warning. (We did have to climb over several different trees along the way that had fallen and were blocking the trail.) 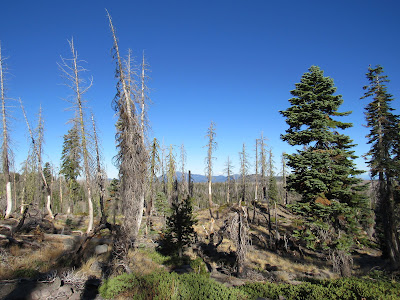 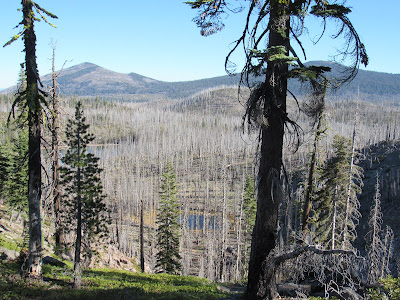 At first, the fire's destruction was fascinating, but after a few miles, it started to get a little depressing. We were under the impression that the trail passed through a small section of the fire damaged forest, but in fact, it accounted for more than half of the hike. Not quite the beautiful, shady, scenic hike I'd been expecting. 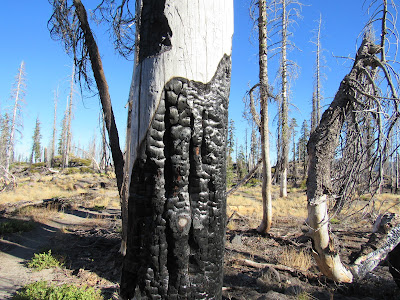 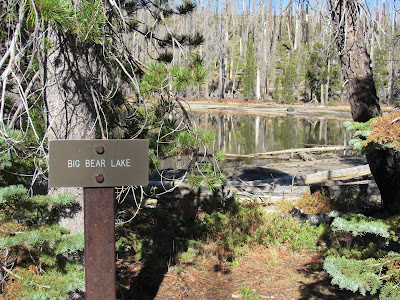 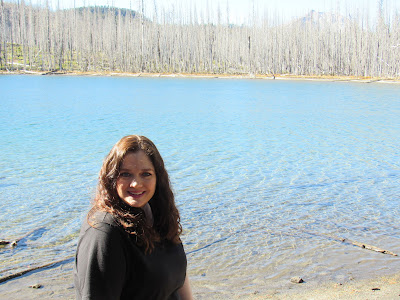 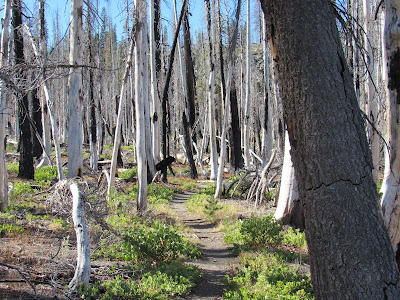 The last time you'll see me fresh-faced and smiling during this hike... (Ah, memories!)

By the time we reached the twin lakes, my calves were beyond burning and my feet pleaded with me to have mercy on them. Unfortunately, we had to keep on trekking. Spending the night in the forest was not an option. 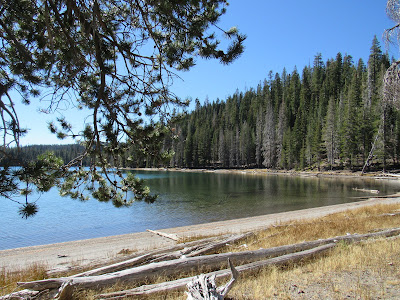 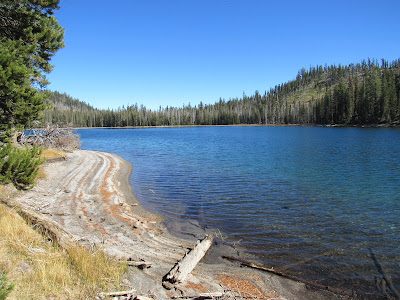 10 miles in and somehow I don't feel like climbing anymore... 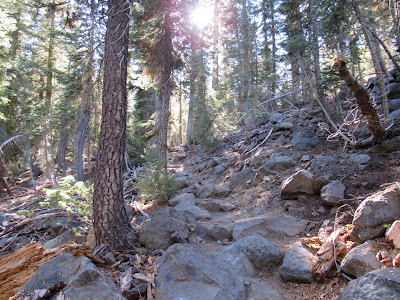 Are we there yet? Yep, we finally arrived at Echo Lake. (But there's still a couple more miles to go to get back to the car!) Echo Lake was probably the prettiest of the 8 main lakes in the loop and I'd recommend just hiking to it and skipping the loop altogether. 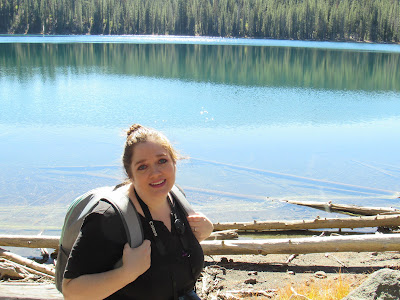 This is the most exhausted I've ever been in my entire life. I still can't believe we were able to keep on pushing through the pain and fatigue and make it back to the trailhead. Between the two of us, hubby is The Rock (and I'm the hopeless romantic who'd rather live in my fictional sunshine and roses fantasy world than join reality) and he even had a difficult time getting through this hike. 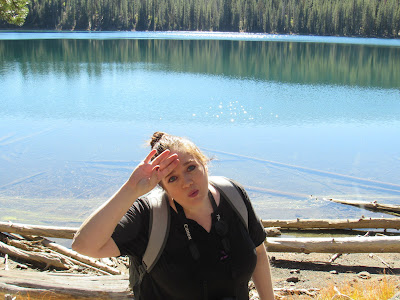 In total, we hiked 12.8 miles with an elevation gain of 1539 feet and it took us 9.5 hours. Whew! No wonder it took me several days afterwords to recover! This trail reminded me who's boss and it sure as heck isn't me. This was our ninth hike in nine weeks and I really thought I could handle the distance. Boy, was I mistaken! And here I thought the hike to Ridge Lakes was easy peasy when it was considered strenuous. Who's in charge of classifying these hikes anyway? From now on, I refuse to hike further than about five miles or so. I proved to myself that I could do longer, but it so wasn't worth it in the end.

Now, it's time to rate this bad boy using our complicated rating system...

My rating for this hike is pretty harsh. After all, it was the hardest thing I've ever done in my life. Seriously. Physically, I don't have anything else to compare it to. When I saw the car in the parking lot, I literally started to cry. I'm giving it 2 Never Again's out of 5. 🚷🚷

Hubby's 4 our of 5 is more generous (most likely because he's The Man), but he also said that this hike is making him throw in the towel as far as longer hikes are concerned. 💪💪💪💪

And when the big guy drops the mike on something, you know it must have been rough.

So, there it is. The Vaughn's have officially been put in their place!

On the plus side, this hike wasn't enough to make us never want to go on a hike ever again. We'll still visit Lassen in the spring to make some videos that show off all those snow-capped mountains and blooming wildflowers. And those two and three mile hikes will seem like a piece of cake. Red velvet cake overflowing with ooey-gooey decadent cream cheese frosting...

Here's the highlight video from our hike! 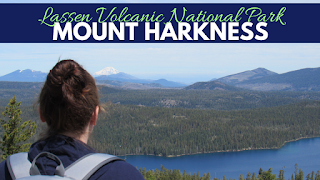 ↔
Let's go on an adventure! 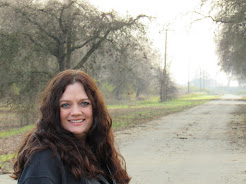 When I'm not writing romance novels, I'm living life by the mile and hitting the open road to photograph the beauty of nature.
Join me on my adventures as I post about beautiful locations, wildlife and photos from my travels.
Here's to creating miles of memories!
Rachelle Vaughn 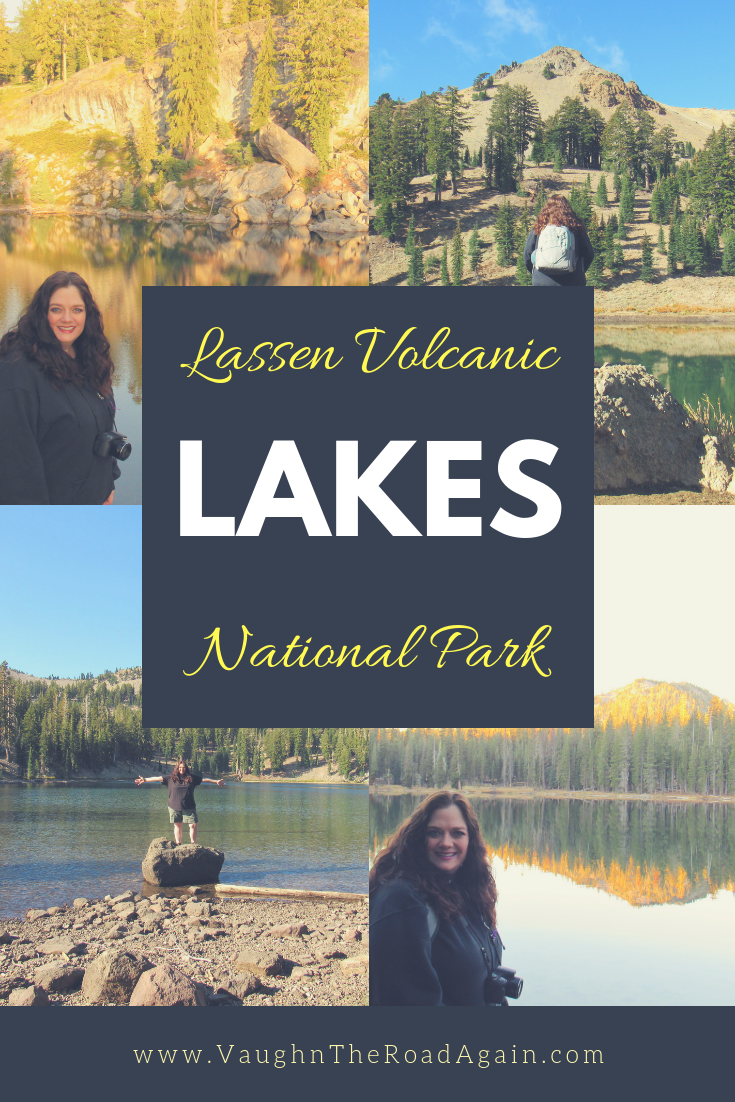 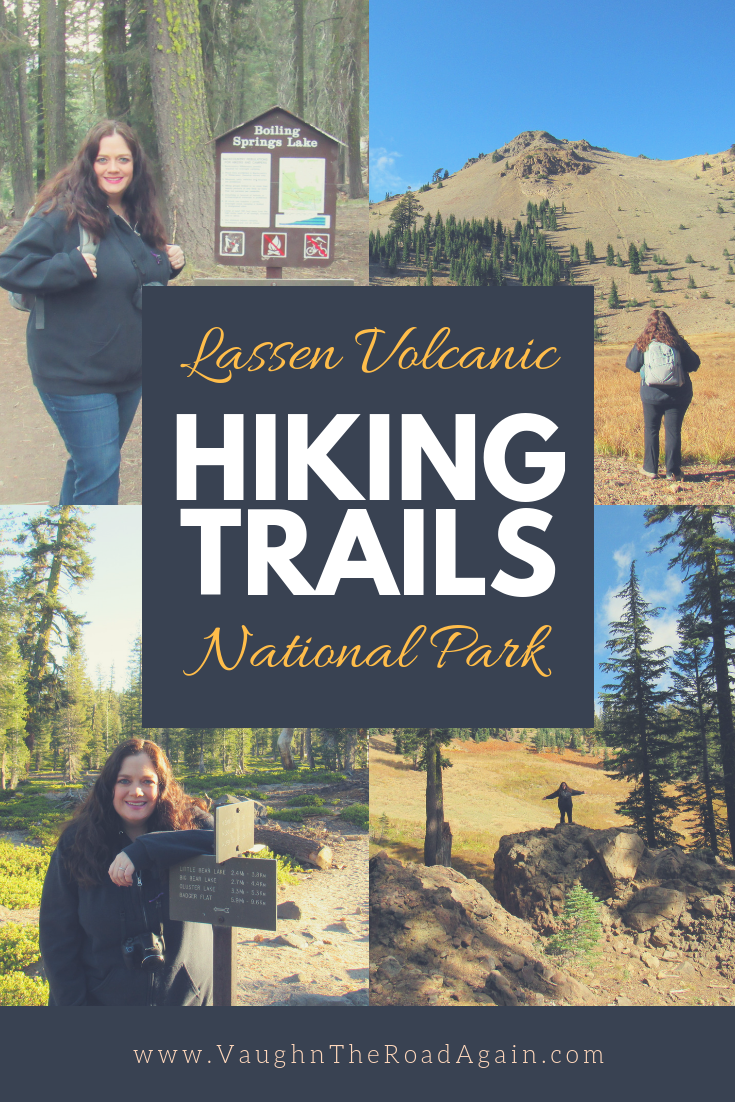